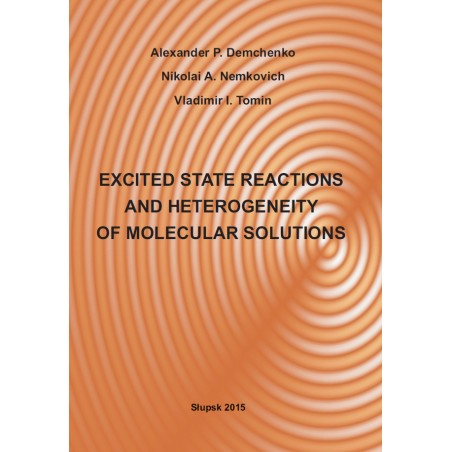 Inherent peculiarities of liquid molecular systems including organic ones are fluctuations of microdensity, micropolarity and other microcharacteristics of medium owing to thermal motions of molecules and their segments. In polymer and biological samples together with thermal fluctuations there also exist gradients of polarity, density, viscosity and so on, the nature of which is due to considerable spatial heterogeneity of the mentioned structures. All these characteristics may modify essentially spectral characteristics of fluorescent probes in such media and, hence, knowledge of spectral characteristics in such conditions opens the door for solving the reverse problem, namely, studying such structure features with the proper fluorescent probes that iswhy this problem is of great practical importance. Spatial and thermal fluctuations and structural heterogeneity in liquid molecular systems affect the spectral heterogeneity of fluorescence probes in solutions and biological systems.
The study of spatially heterogenic nature in biophysics become extremely important in the last decades owing to the application on a great scale of luminescence probes and labels, and due to very essential changing of structure and characteristics of biological systems in distances comparable with fluorophors sizes ~3÷6 Å. Topical interest in the study of this phenomenon in solutions as was mentioned vide infra is due to its wide applications in physics, chemistry, biology and medicine. For example, a few hundreds of molecular organic compounds for very versatile applications are described in a number of monographies (Dobretsov 1989, Lakowicz 2006), the Handbook of Molecular Probes Inc. (Haugland 2002) and on the sites of many firms such as URSA Bioscience LLC, Nanomole, it is very essential that a great number of molecular probes may be ordered commercially.
Solutions of organic molecules are used as laser media (dye lasers), light shutters, filters and Q-switchers, nonlinear transformators of light, photorefractive materials and dyes in colouration of different materials. In informatics they have found an application for data processing, cryptography and storage of information, in holography for recording holograms with extremely high density of information (multifrequency holograms). There are many important applications in chemistry as well, among them the study of intermolecular interaction, sensors of small concentrations of different chemical substances, elements and dangerous gases (Demchenko 2009). It is worth mentioning that dye solutions are severed as main objects for study characteristics of important reactions, firstly, electron and proton transfer reactions, one of the most important reactions in nature (Arnaut & Formosinho 1993, Grabowsky et al. 2003, Demchenko 2009, Tomin et al. 2015). An account of fluctuative features of reagents in photoreactions opens an avenue for a selective control of reactions as it is known that solvatochromic phenomena considerably affect their rates, efficiencies and mechanisms.
Here we have mainly collected materials from relatively new branch of spectroscopy – selective spectroscopy of organic solutions or red-edge excitation spectroscopy. The discovery at the beginning of the 80s of inhomogeneous broadening of electronic spectra of complex molecules owing to intermolecular nonspecific interactions in solid and liquid solutions gave rise to this new field (Rubinov & Tomin 1983, Nemkovich et al. 1991, Demchenko 2002).

The second Chapter (by Vladimir Tomin) is devoted to treatment heterogeneity of molecular solutions and study of charge transfer, CT, and excited state internal proton transfer, ESIPT, reactions in liquid systems. The chapter contents original classical thermodynamic approach elaborated together with the co-authors, allowing to describe the complex of new effects arising in molecular systems due to inhomogeneity of their structures. New original results in study of broadening of electronic spectra of solutes appearing in CT and ESIPT states and effects arising in such reactions at selective excitation are presented and analyzed. Importantly that selective spectroscopy opens good opportunity to select individual groups of solutes with different rates of excited state reactions and, hence, in such way one can controlsmoothly in quite wide range probabilities of such reactions. The third Chapter (by Nikolai Nemkovich) is devoted to spectroscopic study features of polar fluorescent probes in biological membranes which could be observed at selective excitation of such probes subensembles. The described studies perfomed mainly at the Institute of Physics in Belarus and in cooperation with other laboratories. The results described demonstrate that exploration of inhomogeneous spectral broadening of fluorescent polar probes in membranes allows to monitor some microcharacteristics such as, for example, polarity along the depth of membranes. Such studies and approaches are of a great importance due to a wide potential in applications of such methods in study various biological object such as blood cells and so on.
All Chapters of the monography can be readed independently. The authors of the monograph are the researchers actively working in the field of selective spectroscopy of organic and biomolecules from the earlier beginning and contributed greatly to this field. They are Professor Alexander P. Demchenko, Palladin Institute of Biochemistry of the Academy of Sciences of Ukraine, Kiev; Professor Nikolai A. Nemkovich, Stepanov Institute of Physics, National Academy of Sciences of Belarus, Minsk; Professor Vladimir I. Tomin, Institute of Physics, Pomeranian University in Słupsk, Poland (Ze Wstępu).